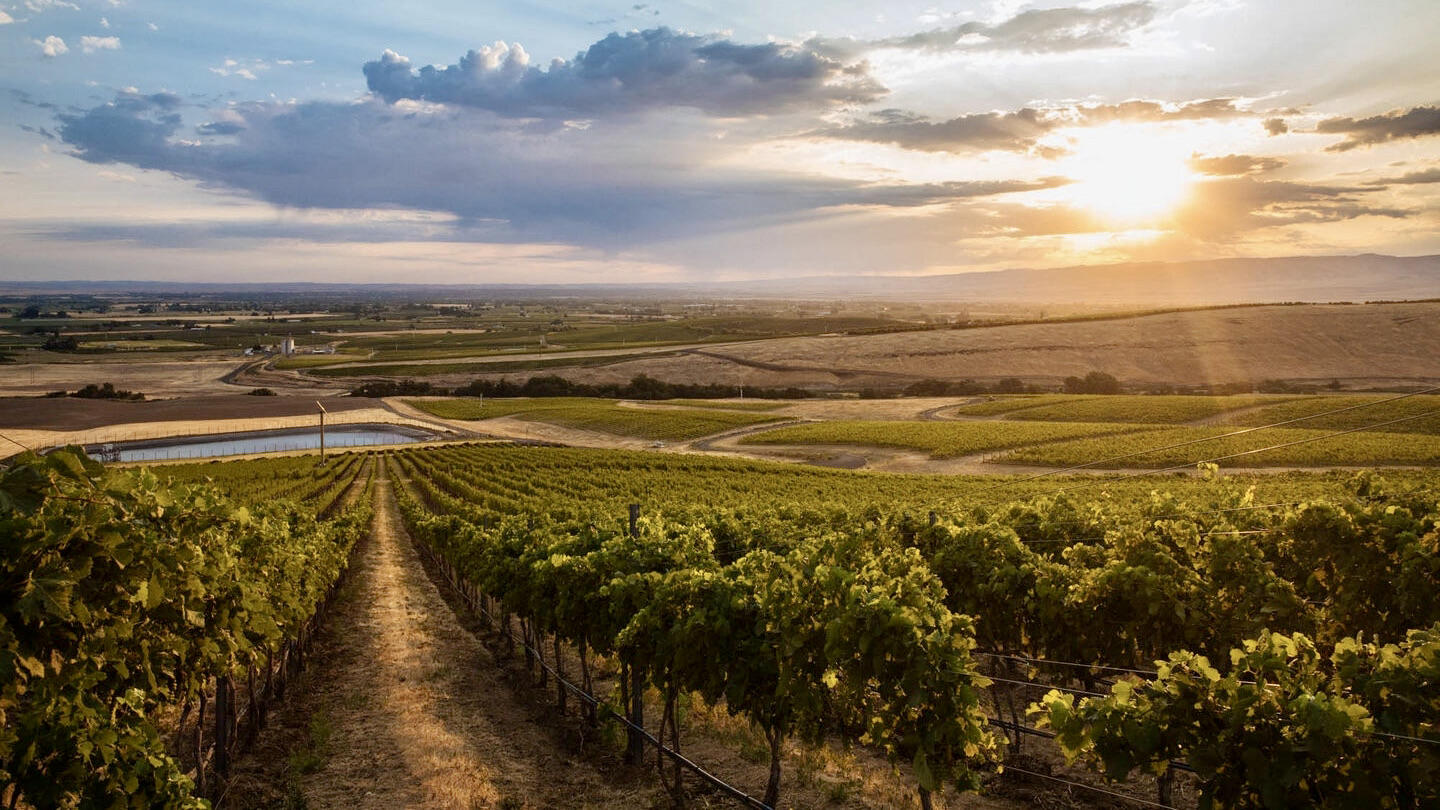 Since 2010, we’ve been producing Sémillon from Birch Creek Vineyard in Walla Walla, one of the oldest vineyards dating back to 1997. The warmer temperatures at Birch Creek Vineyard allows the Sémillon to ripen sooner here compared to other Walla Walla vineyards. Typically bottled as a single varietal and always aged in stainless steel, our Sémillon has always been a summer favorite.

Rosé has always been a playful project for Chuck and the Production Crew. Although many of our past vintages have been blends made using the saignée method, our 100% Sangiovese rosé is currently being produced in a more traditional macerated method.

We’ve been making Walla Walla Cabernet Sauvignon since our inaugural vintage in 1997. For our REININGER label, we commonly source Cabernet Sauvignon from Pepper Bridge, Seven Hills and XL Vineyards. The 2018 vintage scored 92 points from James Suckling.

When Chuck & Tracy Reininger established the winery in 1997 their vision was to be Bordeaux-centric. Although other wines like the REININGER Syrah and Cima have expanded our portfolio, Bordeaux is where we draw inspiration for most of our wines. Over the years, we’ve produced the occasional Bordeaux-style red blend, but BDX was the first to permanently enter our wine collection with the inaugural 2017 vintage. This wine is composed of varietals that are traditionally grown in the Bordeaux region of France and showcases the unique terroir of the Walla Walla Valley.

We’ve been making Walla Walla Carmenère from Seven Hills Vineyard since our first vintage in 2002, and we are the longest running producers of Carmenère in the State. Renowned wine writer, Paul Gregutt, hailed the 2006 Reininger Carmenère as making “a strong claim for being the best Carmenère in Washington, if not the country.”

The first vintage of Helix Sangiovese was in 2004. Sourced from clones 19 & 23 grown at Stillwater Creek Vineyard, our Sangiovese has bright acidity and classic Sangiovese sour cherry aromas and flavors.

Since the inaugural 1997 vintage, Chuck has gained great acclaim in his Walla Walla Valley Merlot. In fact one of his first vintages of Merlot (1999) scored 90 points from Wine Spectator, Wine Enthusiast, and Wine & Spirits. As the years have gone by Chuck has scored 90 points or higher on over 12 vintages of Walla Walla Merlot, and has been included in “Top 20 Wines of Washington State” in Food & Wine (2003) and the “Top 50 Wines of 2014” in Seattle Times for the 2010 vintage.

When the Reininger children were young, they had difficulty pronouncing the name of the man who began working in the winery’s cellar in 1999. The children would call him “Mr. Owl!” In 2002, Raul Morfin became our Assistant Winemaker and Chuck crafted the first Mr. Owl’s Red as a thank you to all of Raul’s hard work. It wasn’t until 2008 that REININGER released another Mr. Owl’s Red. Since 2008, Raul has taken his favorite grapes from each vintage to create a special blend. The 2018 vintage scored 92 points from James Suckling.

WSU alumni, Kelly & Ann Tucker, of REININGER Winery, are proud to present the seventh edition of the WSU Cougar wine.

Since our first vintage of Malbec in 2003, we’ve sourced our 100% Malbec from Pepper Bridge Vineyard in Walla Walla.

Pomatia is our flagship wine under the Helix brand. This Bordeaux-Syrah blend has been comprised of some of the best fruit the Columbia Valley has to offer since its first vintage in 2002. Today, Pomatia is one of our most widely distributed wines.

The first vintage of Helix SoRhô was in 2005 sourced from Stone Tree Vineyard. A southern Rhone blend of Grenache, Cinsault and Mourvédre, the grapes are hand-harvested the same day and co-fermented to make our SoRhô.

For Chuck’s very first vintage under the REININGER brand, Chuck produced three wines, including a 1997 Cabernet Franc. As the winery looked for ways to expand their wine collections and produce limited production wines available exclusively to wine club members, Chuck decided to produce a Cabernet Franc using Weinbau fruit in 2013. Since the release of the 2013 vintage, the Cabernet Franc is now one of our most sought after wine club releases.

The first vintage of Helix Cabernet Sauvignon was in 2005. Primarily sourced from Phinny Hill and Stone Tree Vineyards, year after year our Cabernets have bright acidity and lively dark fruit notes.

In 1999, Chuck Reininger was offered some Sangiovese fruit from Seven Hills Vineyard, and with that fruit he created one of our most sought after wine club exclusives, the Cima. Italian for “peak” or “mountain,” Cima is an homage to Chuck’s mountaineering days on Mt. Rainier. Crafted in the Super-Tuscan style made famous by Italian winemaker Piero Antinori in the 1960s, Cima is a blend of Sangiovese with Bordeaux varieties. As the winery looked for ways to expand their wine collections and produce limited production wines available exclusively to wine club members, many club members asked us to produce a Super-Tuscan blend under the Helix brand. The Helix Cima Piccola, or “Little Cima,” has become an instant club favorite.

In 2009, Chuck saw the potential in the Stone Tree Vineyard Petit Verdot fruit and created a single varietal under his special projects label, CPR. After club members asking for him to make another, Chuck released his first Helix Petit Verdot in 2016. Aged in French oak for two and a half years, the 2013 Helix Petit Verdot was an instant wine club favorite, and we decided to include it in our annual wine club program for our Helix wines.

We’ve been making Walla Walla Syrah since 1999. For our REININGER label, we currently source Syrah from Pepper Bridge and Seven Hills Vineyards. The 2017 vintage received 93 points from James Suckling, 90 points from Jeb Dunnuck and 90 points at the Decanter World Wine Awards. This vintage had a very similar profile to our award-winning 2013 vintage that scored 95 points from Decanter and was named the “Best USA Red Rhone Varietal” at the Decanter 2017 World Wine Awards.

We’ve been making Walla Walla Syrah since 1999. For our REININGER label, we currently source Syrah from Pepper Bridge and Seven Hills Vineyards. The previous release of the 2016 vintage that had two years in oak received 92 points from Jeb Dunnuck, 91 points from Wine Advocate and received a Gold Medal & 95 points at the 2019 Decanter World Wine Awards. The 2016 Syrah XM received 91 points and was included in the "Year's Best US Syrah & Red Rhônes" by Wine & Spirits. This vintage had a very similar profile to our award-winning 2013 vintage that scored 95 points from Decanter and was named the “Best USA Red Rhone Varietal” at the Decanter 2017 World Wine Awards.

Fermented Sur Lie (French for “on the lees” – leaving the wine on the yeast sediment in the barrel. A common Burgundian technique to add mouthfeel, aromatics and to protect from oxidation) for nearly 5 years in a new 500L French Oak barrel using indigenous yeast (no added yeast).

Originally a Bordeaux-centric winery, Norm McKibben, then managing partner of Seven Hills Vineyard offered Chuck a ton of Sangiovese in 1999. Chuck’s drive for exploring and learning new things lead him to accepting the offer and that’s where the adventure begins. Cima, Italian for “peak” or “mountain” is an homage to Chuck’s mountaineering days on Mt. Rainier. Crafted in the Super-Tuscan style made famous by Italian winemaker Piero Antinori in the 1960s, Cima is a blend of Sangiovese with Bordeaux varieties. Since our first vintage in 1999, the Cima has become one of our most sought after wine club wines.

An homage to Washington’s iconic Mount Rainier, Tahoma is the sister wine to our famed Cima. Cellared nearly eight years in barrel, this wine ascends the pinnacle of expression.

CPR RED WINE is a unique wine and is an evolving product of my natural curiosity. “Perpetual” is the best description of its style, a modified Solera blending, with each year’s blend referred to as an “edition.” The First Edition was born by the blending of six grape varietals and six vintages from four distinct vineyards in Washington state. The GOAL: to express and experience the totality of a diverse wine growing region over time in one treasured bottle of wine. Only a fraction of the First Edition was bottled. This coveted fraction was replaced in the original blend by the addition of another grape varietal, vineyard and vintage to rejuvenate the First Edition. This new blend became the Second Edition. For the sixth edition of the CPR non vintage red blend, Chuck Reininger introduced Cabernet Sauvignon, Malbec, Petit Verdot and Syrah from the 2016 and 2018 vintages. This wine sells out almost exclusively to our CPR Allocation List. To guarantee access to our non-vintage CPR RED BLEND, please join the CPR List.