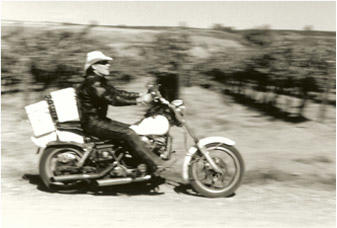 Like Rhône meets The Rocks District, this complex and compelling blend combines classic mourvèdre notes of meat and minerality, with abundant layers of spicy black pepper, rose, citrus and smoke, as well as lush Kirsch and black raspberry flavors from the grenache and syrah. Good natural acidity adds poise to the ripe fruit flavors, as well as lift and definition to the silky tannins that are one of the hallmarks of the rocks.

The season began with early springtime heat that yielded extremely small clusters of intensely concentrated fruit. Prior to a big cool down in the last several weeks of the growing season, 2013 was on track to be one of the hottest growing seasons in memory. Plenty of sunshine, and a lack of any significant rain events, allowed us complete control over irrigation, which in turn enabled us to fine tune crop size and fruit development. As the vines at our Rockgarden Estate have matured and evolved, in addition to becoming a source for fabulous syrah and cabernet, they have also begun yielding a spectacular expression of mourvèdre.

We harvested our mourvèdre and grenache on October 11th at 21.0˚ and 23.0˚ Brix respectively. The syrah came in on October 4th at 23.1˚. All three varieties were sourced from the Tablas Creek nursery, and initially from Châteauneuf-du-Pape. Grapes were harvest by hand and hand sorted on shaker tables.

The final blend was bottled unfined.

Everything was destemmed and fermented in small 1-ton containers for slow, cool native yeast fermentations. The syrah took 15 days until pressing, and the mourvèdre and grenache took 10.

Only free-run wine was selected, all of which was aged on the lees in 100% neutral barrels for 17 months. Burgundy barrels were used for the syrah and grenache, with Bordeaux barrels selected for the mourvèdre.